Technically speaking, the NSW Labor Party is structured as a representative democracy. In practice, outcomes are generally undemocratic for reasons examined below.

The structure in other states is broadly similar, with a range of variations, especially around numbers and ratios. 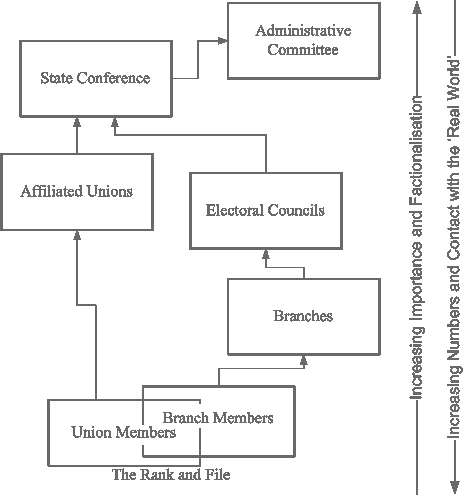 The ‘supreme decision making body’, only Conference has the power to change the rules of the Party or the Policy Platform. Conference appoints the Administrative Committee, the Party Officers (General Secretary, 2 Assistant Secretaries, and President and 3 Vice Presidents), delegates to Federal Conference, members of Machinery Committees, members of Policy Committees and candidates for the NSW Legislative Council (the NSW upper house).
Conference is composed of around 800 delegates, 50% of whom come from Afilliated Unions, around 100 delegates appointed through a range of mechanisms (16 from Young Labor, 16 to represent Federal Parliamentarians, 16 to represent State Parliamentarians, the 35 member Administrative Committee and 3 from each Policy Committe and 3 from the women’s Committee) and the remainder from State and Federal Electoral Councils. Enough Conference Delegates are members of a faction that Conference outcomes are all but totally determined by the factions.

Also known as Admin, the Administrative Committee directs the Party between Conferences. It has most of the powers of Conference and is more important because it meets every month whilst Conference meets only once a year.
The Administrative Committee is composed of 35 members, of whom 25 are directly selected by Conference, plus the 7 Party Officers (as above), plus the State and Federal Parliamentary Leaders, plus, in a non-voting capacity, a member of Young Labor, normally the President. These 35 people are sometimes known as the ‘faceless men’, not because their identity is secret but because it is not publicised and the legwork required to identify them is beyond the ability of most Australian journalists.
The NSW Administrative Committee is totally factionalised. Committee members are either factional heavy weights or are appointed by factional heavyweights. In theory, there are be enough non-factionally alligned delegates at conference for this not to be the case, but in NSW the non-factional delegates do not vote in a sufficient block to elect any Administrative Committee Members.

Branches represent an area which can be as small as a single suburb or as large as a whole Electorate (in which case the Branch acts as the Electoral Council and is known as an Electoral Branch). Each Branch sends a number of delegates to each of its local Electoral Councils, depending on the size of the branch, and depending on whether a branch straddles an electorate boundary.
Branches are composed of party members. Most members will attend their nearest branch but members may attend any branch in their State Electorate. Regular attendance at a branch is a prerequiste for participation in preselections. Most branch members are not members of a faction, but Branch Executives are disproportionately factionalised.

Not all Unions are affiliated. Non affiliated unions play no structural role in the ALP. Affiliated Unions send a number of delegates to conference, depending on the size of the union’s membership. There is no restriction on how a Union chooses its delegates. In practice, most unions delegates are selected by the union secretary, meaning that delegates represent the interests of the Union secretariate first, and ordinary union members second, if at all. Many union delegates are not members of the union they nominally represent. Many union members do not even realise that they are ‘represented’ at Conference.

The Rank and File:

It is still common, if less so than it used to be, for a person to both a party member and a union member.

Factions are not formally part of the structure of the Labor Party, but their members compose a percentage of all party units, most especially the higher echelons. In a self-reinforcing pattern, factions are able to determine the outcome of most significant decisions, which means that they are able to command the loyalty of their members, and generally above and beyond loyalty to the rank and file. Because the main source of information about happenings higher up the structure is the delegates themselves, this conflict of interest is only rarely visible to those below. Because this dilution of democracy is repeated at every level of the structure, alignment between the rank and file and the Administrative Committee is effectively non-existent. Most of the Rank and File do not realise that they, indirectly, choose the Administrative Committee, or even that it exists.

This entry was posted in Misc. Bookmark the permalink.